NAPA, Calif. (AP) — Mike Rippey stood among pieces of metal, porcelain and other remnants of the California home where his 100-year-old father and 98-year-old mother had died in the raging wine country wildfires.

Rippey said Tuesday his brother had discovered their bodies after driving to the home and managing to get past security.

He said his father Charles appeared to be heading to the room of his mother, Sara, when he was overcome by the smoke and flames.

"My father certainly wouldn't have left her," Mike Rippey said. 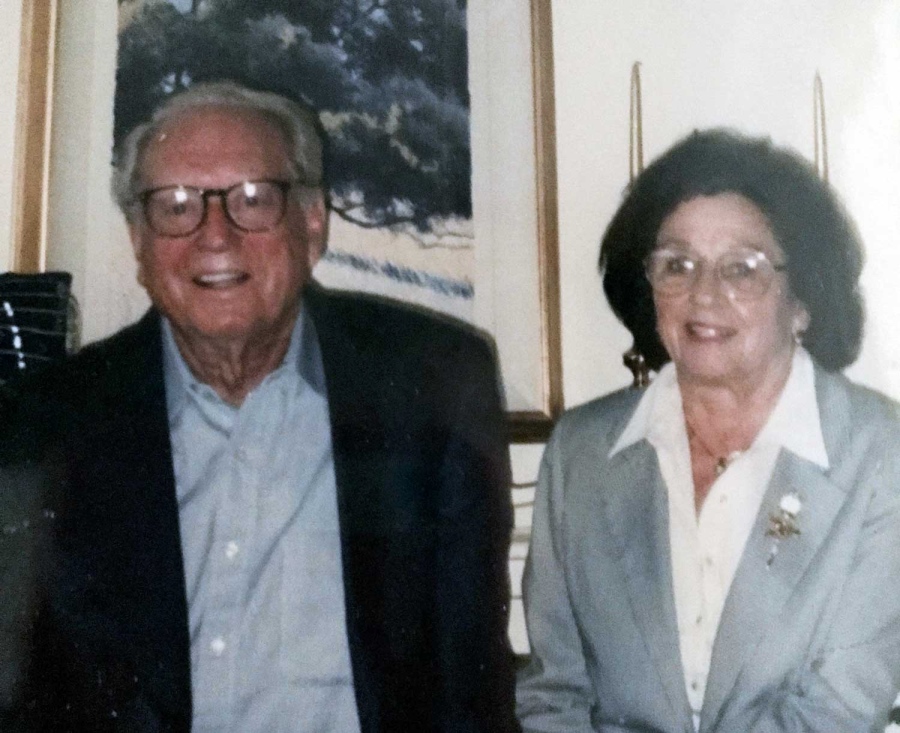 This undated photo provided by their son Michael Rippey shows Charles and Sara Rippey. Charles, 100, and Sara, 98, were unable to leave their Napa, Calif., home, and died when the Tubbs fire swept through. Their bodies were found Monday, Oct. 9, 2017. COURTESY MICHAEL RIPPEY VIA AP

The couple had met in grade school in Wisconsin and been together ever since, celebrating their 75th anniversary last year.

Rippey, 71, said he and his siblings couldn't imagine how either parent would have navigated life if just one had survived the flames.

"We knew there's no way they would ever be happy, whoever was the last one. So they went together, and that's the way it worked," he said stoically.

In the charred remains of the home, only metal and porcelain survived to testify to the couple's long life together. There were coffee cups along a low sill; two metal chairs, side-by-side by a patio table; and a porcelain tea set of white and soft washes of blue, some pieces still intact.

Charles Rippey — nicknamed "Peach" as a toddler for his chubby cheeks — and his wife were among the 17 victims who have died in the fierce, fast-moving fires that started on Sunday and raged through neighborhoods. None of the other victims had been identified.

Authorities are expecting other older people to be among the dead, who like the Rippeys might not have been able to move fast enough to beat the flames.

Mike Rippey said his mother had previously suffered a stroke.

Seventeen wildfires raging across parts of seven counties have destroyed more than 2,000 homes, businesses and other structures.

The wildfires rank among the five deadliest in California history, and officials expect the death toll to rise as the scope of destruction becomes clear.

At least 185 people were injured, and nearly 200 have been reported missing in Sonoma County alone, though many may be safe but unable to use damaged communication systems.

Mike Rippey was in London and boarding a flight to California when his brother called and told him their parents had died.

The couple attended the University of Wisconsin and married in 1942 before Charles Rippey served as a U.S. Army engineer in World War II. He became an executive with the Firestone tire company.

Rippey said he had no plans to rebuild the home.

Julie Watson in San Diego and Ellen Knickmeyer in Napa contributed to his report.

Copyright (2017) Associated Press. All rights reserved. This material may not be published, broadcast, rewritten, or redistributed.

This article was written by Rich Pedroncelli and Sudhin Thanawala from The Associated Press and was legally licensed through the NewsCred publisher network. Please direct all licensing questions to legal@newscred.com.

“I will tell you this: NASA has been in talks with Tom Cruise...and we will do everything we can to make it a successful...

Alfred Hayes enjoyed early success in 1946 with his first novel, "All Thy Conquests," based on his military experiences in...

The Army Special Forces operators who earn those coveted green berets are an enterprising bunch. They kinda have to be.

If zeal could be weaponized in wartime, the Confederacy might have had a chance.

"Return to Hardwick" tells an incredibly specific World War II story and somehow manages to honor everyone who served in that...

Fans of Robert E. Lee might want to learn a bit more about the general who won the war.