Actor/comedian and Marine Corps veteran Rob Riggle may give his greatest performance yet Sunday at the Bank of America Chicago Marathon.

Riggle, a former correspondent for "The Daily Show," is running his first marathon in 14 years despite suffering a calf injury while training for the 26.2-mile race.

"I'm going to be running alone so if (runners) see a guy at the very end of the race hobbling along, it's probably me," Riggle said.

More than 40,000 other athletes are expected to toe the start line in Grant Park with Riggle and supermodel-turned-activist Christy Turlington. Wheelchair participants are scheduled to begin at 7:20 a.m., while runners are set to start at 7:30 a.m.

Riggle, 46, said he has been a fan of Chicago since a college road trip with his fellow University of Kansas classmates to attend St. Patrick's Day festivities. He said he decided to run the Chicago Marathon in July and began following an ambitious training schedule. 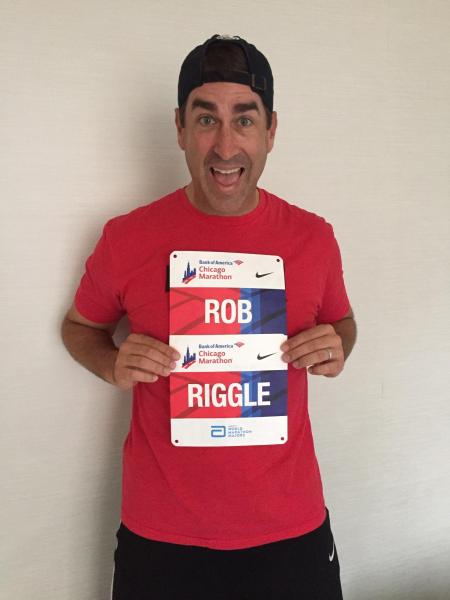 The plan was working -- until he experienced pain during a beach run a few weeks ago. Riggle said rested his body and underwent laser therapy and ice massages. He said he has gone on a few runs since then, but his longest training run was 13 miles. Some experienced marathoners recommend completing at least one 20-mile run before tackling a marathon.

"My goal on these things, generally, isn't to shatter any world records. The completion is goal enough for me," Riggle said.

Riggle ran the 2002 New York City Marathon in about 5 hours, 47 minutes, according to online records. A retired Marine, Riggle said he ran the New York marathon shortly after serving in Afghanistan. Riggle is running the Chicago Marathon on behalf of Project Salute, an organization that supports veterans.

While he's in town, Riggle said he may try to catch an improv show, grab a steak dinner at Gibsons Bar and Steakhouse and "do a lot of stretching."

He is set to appear in the family comedy "Middle School: The Worst Years of My Life," which opens in some Chicago theaters Thursday.

Visit the Chicago Tribune at www.chicagotribune.com

This article was written by Tracy Swartz from Chicago Tribune and was legally licensed through the NewsCred publisher network.

Entertainment Movies Movies
© Copyright 2020 Chicago Tribune. All rights reserved. This material may not be published, broadcast, rewritten or redistributed.

A Green Beret Describes How Good the Russian Spetsnaz Are

In 2001, Mark Giaconia was a Green Beret patrolling the border areas between Kosovo and Serbia.

In Lake Placid, an Olympic Miracle from 40 Years Ago Still Inspires

“Battlegrounds” will focus on national security and foreign policy, including his contentious time with Trump.

President Trump Apparently Not a Fan of 'Parasite'

“What the hell was that all about?" Trump said.

Engagement from Near Space! Out of this World Proposal!

Capt. Stuart Shippee proposing from near space to his girlfriend Marie Lisman.

HISTORIC FOOTAGE: 75th Anniversary of the Battle of Iwo Jima

The Commandant and Sergeant Major of the Marine Corps reflect on the 75th anniversary of the battle of Iwo...

What It’s Like to Land on an Aircraft Carrier