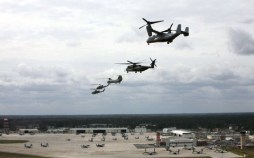 MCAS New River is the primary United States Marine Corps helicopter base on the East Coast and supports aircrew training for the helicopters operated by Marine Corps aviation units. McCutcheon Field is named in honor of Brigadier General Keith B. McCutcheon, one of the pioneering figures of Marine helicopter aviation.

New River is also the east coast home of the Marine Corps' variant of the V-22 Osprey, the most innovative and capable rotary winged aircraft in military aviation history.