SEAL Delivery Vehicles & The Secret War off the Horn of Africa

Few people realize what happens at a SEAL Delivery Vehicle Team. It's a very different and challenging underwater mission.

The SEALs of an SDV Team spend days training underwater. An SDV SEAL will lock out of a submarine unseen in the cold dark depths of the ocean, only to then endure an 8 hour transit just to get to a land insertion point. And sometimes they never surface at all but, still attack and track targets...we will not get into those mission specifics but you can use your imagination to guess at some likely scenarios.

"The small SDV makes for tight quarters and you're completely engulfed by the darkness of the "sled". That and several atmospheres of pressure make for an interesting night. Sometimes the only illumination is coming from the glow of the onboard Nav systems or the eery bioluminescence".-Undisclosed SEAL.

It takes a strong mindset for the SDV job and the claustrophobic need not apply. 8 hours of transit time underwater and then their mission really starts once they get to an insert point somewhere off the shark infested waters of North Africa.

Enjoy the excerpt below. It gives you a look at what types of missions the SDV can accomplish and what they're up to in the middle of the night while most are sleeping. Hit the "Like" button up top if you enjoyed this post. The team at Kit Up appreciates your help spreading the word via Facebook! Thanks! -Brandon

One night in November 2003, beneath the moon-washed waters off Somalia’s northern coast, a small, dark shadow slipped away from the attack submarine Dallas and headed toward the shore.

The smaller shape was a 21-foot-long submersible called a SEAL delivery vehicle.

Launched from a tubular dry deck shelter on the sub and designed to infiltrate Navy SEALs on covert or clandestine missions, the SDV carries its crew and passengers exposed to the water, breathing from their scuba gear or the vehicle’s compressed air supply. Aboard were a handful of SEALs on a top-secret special reconnaissance mission into a country with which the U.S. was technically not at war.

The SEALs grounded the SDV on the ocean bottom and pushed away from it, taking with them the centerpiece of their mission, a specially disguised high-tech camera called a Cardinal device.

Unbeknownst to them, during the previous 24 hours, their mission had been the subject of Cabinet-level debate in Washington and had almost been canceled until President George W. Bush gave the go-ahead.

Now they were conducting what a special operations source with firsthand knowledge of the operation referred to as “a long swim through some of the most shark-infested waters in the world” toward the coastline that loomed ominously ahead of them. The hard part was just beginning. Click Here for the Full Story. 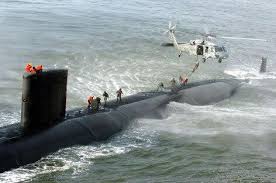 Special Operations KitUp KitUp
© Copyright 2020 Military.com. All rights reserved. This material may not be published, broadcast, rewritten or redistributed.

The airstrikes come as Taliban and government-appointed negotiators are meeting for the first time in Qatar.

She’s touted as a force to be reckoned with. After nearly a 100-year absence, a U.S. Navy vessel bears the name “Montana.”

'We Are the Worst Nursing Home in Hawaii', Ombudsman for Veterans Home Speaks Out

The death toll at the Yukio Okutsu State Veterans Home in Hilo has risen to 18.

Robert W. Gore, the Inventor of Gore-Tex Fabric, Dead at 83

Gore-Tex fabric has billions of pores that are smaller than water droplets, leading to waterproof but breathable clothing.

The campaign of President Donald Trump released a letter from 235 retired senior officers backing his re-election.

The news comes four years after the Air Force laid out initial plans for what its future fighter jets might look like.

Air Force Cargo Planes Could Get New Job in the Fight

The recent exercises were one of many the Air Force is conducting to test its Advanced Battle Management System.

A veteran of the Marine Corps and Army National Guard, he went through boot camp more than four decades ago.

Cmdr. Robert Arias is at least the third Navy commander removed from his job in recent weeks.