The Sun Herald | By Karen Nelson

PASCAGOULA -- Picture a nuclear submarine listening in on Cold War communications by tapping into deep, underwater cables near Soviet territory in 1979.

Later the sub would go back and send divers down to retrieve the recordings that were to be sorted out by federal agents on board.

The submarine, USS Parche, was built extra-sturdy for navigating under ice caps. It managed the Sea of Okhotsk near the Soviet Union.

Local historian Dr. Chris Wiggins' new book, "Ingalls' Cold War Nuclear Submarines," starts off with the spy tale of the USS Parche, the most decorated warship in the U.S. Navy and built at Ingalls. 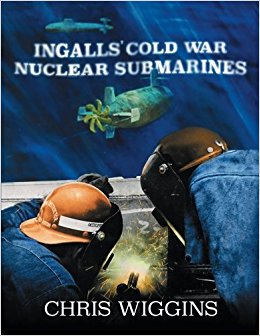 Wiggins' book tells how the Mississippi shipyard, known for building cargo ships, came to build and overhaul nuclear subs, "the world's most technologically advanced craft at the time, rivaling the manned space program in complexity" during the yard's heyday of the 1960s and 70s.

Ingalls built or refurbished more than 24 of the nuclear vessels.

But the book is more.

Wiggins told the Sun Herald, "It's been long enough that what these submarines did in the Cold War -- their spy missions -- have been declassified.

"We living here would see those ships built and launched," he said, "Then they'd sail off, and we would forget about them."

The USS Parche spied on the Soviet Union naval bases, he said. It would find a cable crossing, and they would send out divers to tap the cable.

"It was a direct line into the Soviet naval system," he said. "It was our most successful spy ship, but the least known submarine. .... It would go under the polar ice pack to get to the northern Soviet Union."

During those times it was easier for the Soviet military to call than to use coded wireless messages, so the Parche was tapping into phone cables from land lines, he said.

"They first had to find the cable," Wiggins said. "Nuclear subs could stay under forever, until they ran out of food. That's what limited them."

They put a temporary tap on the cable, let it record for a week, and they released divers to retrieve the information recorded.

"CIA agents aboard would listen and decide which were the best lines. Then go back and pick up the tap and switch it out."

Eventually a spy gave away the project in the Okhotsk, he said, "but they didn't realize we also had a cable tap in the North Atlantic. The Soviets found one, but never thought to look in other places."

Wiggins gets a kick out telling the spy stories from a half century ago.

The tale of how Ingalls made the technological conversion to nuclear subs is just as intriguing.

The book is the fourth in a series of books by Wiggins to preserve Jackson County history. Like the others, this book is a fundraiser for the Jackson County Historical and Genealogical Society.

His books, over several years, have raised more than $11,000 for the cause.

"Ingalls' Cold War Nuclear Submarines" is available on Amazon.com (search terms "Ingalls" and "submarine") and also can be purchased in the Pascagoula Public Library's Genealogy Department.

Wiggins set the stage with these words, "The Cold War was in full swing. Both sides had nuclear weapons. The Soviets were ahead in rocketry and conventional submarines. The United States needed to maintain strategic leadership."

The Parche also has an epilogue.

It was decommissioned in October 2004, "the last Ingalls submarine to be in service. In her time she was the nation's most super-secret surveillance naval vessel," Wiggins writes.

"Even today she remains as the most decorated U.S. vessel of all time. With her passing, the era of nuclear-powered vessel and submarine construction at Ingalls became history.

Ingalls' sojourn into submarine work extended from June 1956, when the company got the contract for USS Blueback, until its successor management company, Litton Ingalls, completed its last nuclear vessel overhaul and USS Sunfish sailed out of Pascagoula harbor in October 1980.

"During this 24-year period, the shipyard evolved from a facility constructed on the eve of World War II to a high-tech and mainstream player in the nation's defense industry. In that, the submarine business played an essential role, leading the company to where it is today, a main contributor to our nation's military strength."

This article is written by Karen Nelson from The Sun Herald and was legally licensed via the Tribune Content Agency through the NewsCred publisher network. Please direct all licensing questions to legal@newscred.com.

Radios and Communications Entertainment Books Books
© Copyright 2020 The Sun Herald. All rights reserved. This material may not be published, broadcast, rewritten or redistributed.

Spend a few bucks and create your own military film festival.

Two classic books on war are back on high school reading lists in Palmer, Alaska.

Sound Off: Who's Wearing a Mask?

So, we're curious. What's the attitude toward face masks in your area?

Feltman's of Coney Island is keeping patriotism alive by supporting the Tragedy Assistance Program for Survivors with...

Two classic books on war are back on high school reading lists in Palmer, Alaska.

Nine years ago Will Chesney got an unexpected call: He was to grab his dog and head to Virginia, immediately.

Nguyen Phan Que Mai's "The Mountains Sing" -- written in English -- aims to shine a light on the stories of women who...

The acknowledgments at the end of Lawrence Wright's novel "The End of October" read like a who's-who of epidemiologists...

"There is something uniquely American about a man and his dog. This is not a SEAL book, and it's not a dog book. It's a story...